In yesterday’s Part One of our lengthy conversation with Katie Stone, she detailed her background and explained how she’s come from taking baby steps online and in bar-poker clubs to becoming a prominent figure in the game, with more than one twist along the way. Today, we’ll focus on her growing relationship with the World Poker Tour, including her latest role as an instructor for the WPT’s broad training initiative, LearnWPT.

Let’s move over to the WSOP, Katie. You’ve had a fairly long running relationship with them, correct?

Katie Stone: I have, yes. I commentated my first WPT final table in September of 2018, which was the WPT Borgata championship event. And I was a rather last-minute addition to the team. To be honest, I had not thought that I would go down the commentating route, which is kind of funny when when you look at what’s transpired in the last few years.

Also my mother was a very well known broadcaster here in Houston, too. So why I wouldn’t have put those two things together a little bit sooner is beyond me.

Stone: Yeah, I was her executive producer. She had a very long running radio show as well, here in Houston. I was her executive producer for a long time. I have kind of a unique skill set in that. I’ve been around broadcast media – my mother was also an editor at the Houston Post. Then she was a Fox26 correspondent for 20 years. I’ve been exposed to all three mediums in very intimate levels. So, yeah, why I didn’t assemble that earlier….

But Angelica Hale, Vice President of the World Poker Tour, she was the one who tasked me for this position initially. She said, ‘you need to start commentating,’ and I said, ‘Okay, when?’ And she said, ‘How about tomorrow?’ I said, ‘Oh, are you serious?’

And so that was the start of my relationship with the World Poker Tour, and it’s been absolutely amazing working with them. Once I started doing a few more final tables, I realized that this was a group that I really wanted to be around a lot more. And so a few years after that, ust in 2021, coming up on one year now, I’m also with LearnWPC as an instructor and a commentator, and as a producer as well.

Please tell us a bit more about LearnWPT.

Stone: LearnWPT is the official training platform for the World Poker Tour. We’ve got a website, at learnWPT.com, where you can access videos, webinars,and a variety of different content from our instructors. The instructors are Andrew Lichtenberger (“Luckychewy”), Brian Altman, Tony Dunst, of course, who hosts the World Poker Tour, Michael Gagliano, who is a New Jersey online/live pro as well. And Vanessa Selbst – everyone knows Vanessa Selbst – another online pro, Eric “Rizen” Lynch, and myself. These are the Learn WPC instructors. Everybody makes content. There are different forms of content that we make. We recently just launched a new show called “Play Better Poker,” which is home-based in Vegas at the HyperX Sports Arena, and then we take it out on the road at the WPT Championship event main-tour stops throughout the U.S.

The show is a different kind of educational content where I talk to WPT superstars, you know, meaning the people who’ve really figured out how to play live poker well and who have been around for a long time. We’ve done a few episodes so far, with Tony Dunst, Brian Altman and Luckychewy and we talk about ways they work on their game, what what they’ve done throughout their career, and how it’s different from the very beginning of poker. Because, as you know, training sites and training material are relatively new additions to the poker realm.

Back when I was getting started in ‘05, ‘06, there really was not much out there other than Brunson’s Super/System and Harrington’s books on hold’em and Sklansky’s books, and then magazine articles. There just wasn’t a whole lot out there. The twoplustwo forums were huge and were my prime source of “real poker content,” so to speak. More up to date, because things were changing pretty quickly. There weren’t too many people writing books at that time, so there wasn’t a whole lot of new educational content coming out.

With the addition of poker solvers and software, we are able to learn a lot more, a lot faster now, and also a lot more efficiently. The WPT GTO (game theory optional) trainer, what that essentially does is it takes all of the work that the solvers do and that the high-level pros do and it bundles the info into a simpler, replicable format so that players can get reps in very easily, reps that simulate real game situations that come up often. 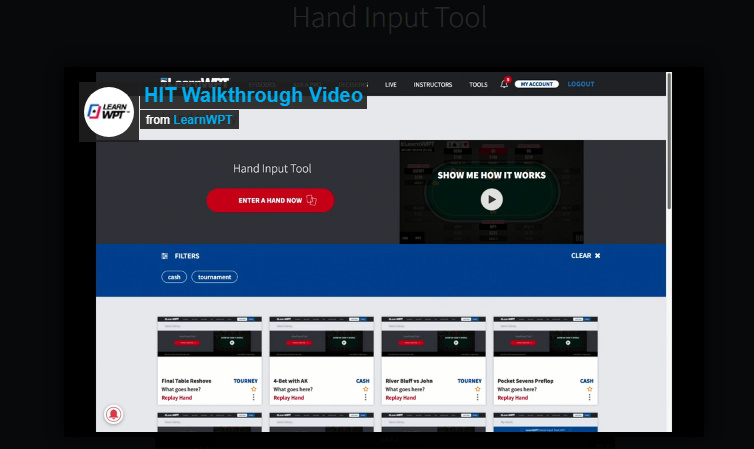 You know that we play the most hands when we’re in the blinds, of course, so those are probably the scenarios that you as a player would want to work on immediately. This is where you’re for sure putting chips in the pot; you can’t get can’t get out of paying the blinds. So you try to look at situations that are small blind versus big blind, or at situations that are button versus small blind, big blind, cutoff, and so on. You can model the decline [in expected value from one situation to the next].

We also offer these little mini-sims that the trainer has already put together. It’ll present to you little puzzles, like what would you do in this situation, and then explain to you why your action is possibly good or breakeven or possibly incorrect. And those are really valuable tools for players today to have access to. If we had had something that, you know, something that nice and accessible back then, we all would have made a whole lot more money. At least I would have. That’s kind of the breakdown of the LearnWPT website. 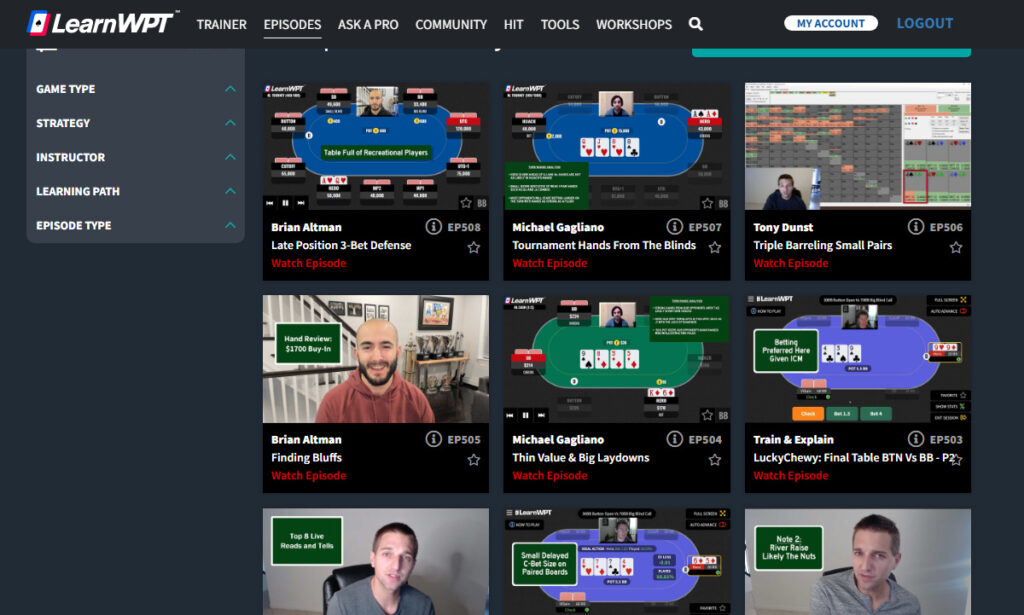 With you being part of the LearnWPT traveling squad, it’s really making you more of a road warrior, too.

Stone: It is. Now that we’re home-based in Houston, it’s a lot easier to get to Vegas and Florida, which are the two biggest ones. Then we get to Thunder Valley out in Sacramento a decent amount. The majority of my poker play now, as you correctly noted, is mostly live. I’ve been primarily an online player for the last 12 years or so, and now my daily professional activities have shifted quite a bit into more heavily into LearnWPT in content production, video production, strategy videos, and final-table coverage.

Whereas before, if online was 75% of my work time and 25% of the other was live, it’s basically flipped right now. Most of the LearnWPT team gets out to all of the World Poker Tour championship event stops. We’re coming up on the next event, which is next week in Florida at the Seminole Hard Rock Poker Open (SHRPO). And it’s kicking off with a big $400 opener, I think it’s a $400, million-dollar opener, and we’re also kicking off with the first live LearnWPT workshop since the pandemic. So this is kind of a big deal. It’s April 2 and 3.

Who’s going to be in attendance for LearnWPT in addition to you?

Stone: Besides myself, we will also have Luckychewy, Andrew Lichtenberger, who will be down there for the $3,500 event as well as the $25K. There’s a $25,000 event at the World Poker Tour SHRPO, which is really cool, you know, getting some of those high rollers in there. And then there’s Eric Lynch, Rizen, coming as well.

It’ll be the three of us instructing, and we’ve brought back the labs. It’s hands-on instruction at the poker table with one of the instructors in the box, which is pretty cool. I mean, anytime you can get somebody like Chewy in front of you at the poker table, face to face, and you can talk to them, it is really a good thing. These guys love talking about poker, and there may not be anyone better out there to do it with.