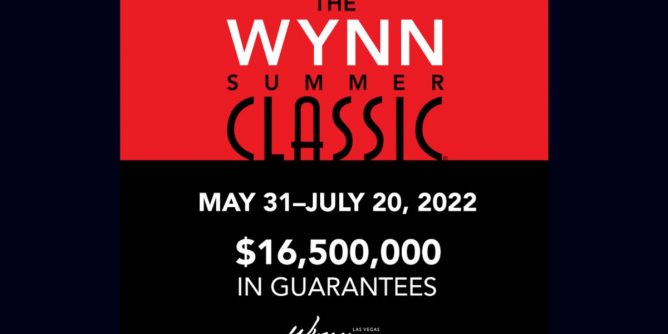 Wynn Resorts Las Vegas has released the full slate of events for the 2022 Wynn Summer Classic poker series, which will run at the iconic Vegas resort from May 31 through July 20, 2022. The initial release of the series schedule a couple of days ago has just been followed by an update/correction, flipping the dates and times of the $3,000 8-Game Mix and $3,000 PLO events:

We’ve made some small adjustments to the Wynn Summer Classic schedule. You will find that the dates of the $3000 8 Game and $3000 PLO have been swapped. We apologize for the error.

The current and corrected schedule remains available at https://visitwynn.com/documents/wynn_summer_classic-schedule.pdf.

Overall, the 2022 Wynn Summer Classic offers $16.5 million in prize-pool guarantees over a seven-week run that exactly mirrors the dates of the 2022 World Series of Poker. The Wynn Summer Classic has quickly established itself as one of the most significant competitors to the WSOP in the post-Memorial Day window when the world’s poker-tournament action clusters in Las Vegas for nearly two months.

The Wynn’s various poker series have also garnered very high marks from players for quality of venue, desirable tournament structures, and other player-friendly elements. With the WSOP’s move this year to its new home at Paris/Horseshoe, the east side of the central Strip will feature three major series — including the Venetian’s Deepstack Championship, all within a couple of blocks and easy walking distance of each other, for most of June and July

The 28-event Wynn Summer Classic offers a deep mix of event choices for players, with the single highest event guarantee, $3.5 million, coming in the series’ de facto main event, the $3,500 NLH Championship that runs from June 24 through June 28. This three-day event features three separate Day 1 flights and carries a $3,500 buy-in.

That $3,500 buy-in is the highest to be found throughout the entire series. Unlike most of its upscale competitors, the Wynn Summer Classic stays away from the “high roller” type of event that draws elite fields at very high price points. Instead, the series focused on popularly-priced “mid major” price points. The lowest buy-in throughout the series is $550, found in several events, though many satellites are available with even lower entry fees.

Yes, the Wynn’s famed “Mystery Bounty” event returns as well — and not once, but twice. The first and larger mystery bounty event offers its own $2.5 million prize pool guarantee in mid-June. The first of four consecutive Day 1 starting flights begins on Monday, June 13, with the Day 2 — when all the mystery-envelope bounty fun takes place — scheduled for Friday, June 17.

The second mystery bounty tourney takes place four weeks later, in the middle of July. This one offers three starting flights instead of four and guarantees $1.5 million in total payouts.

All told, the 2022 Wynn Summer Classic includes seven different events with guarantees of a million dollars or more. Besides the $3,000 NLH Championship and the two Mystery Bounty events, four other no-limit tourneys will offer prize pool guarantees of between $1 million and $2 million each.