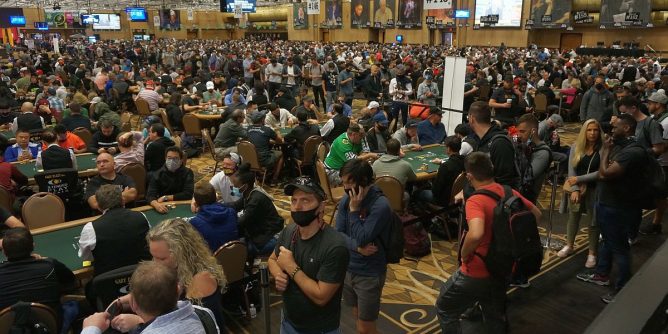 Nine weeks out from the beginning of the 2022 World Series of Poker, the WSOP has launched an unprecedented blitz in an effort to find enough manpower — in particular, trained dealers — to help run the series. Yesterday, the WSOP issued a press release dedicated solely to its efforts to find dealers, in which it declares itself to be “enticing dealers to be part of historic summer tournament,” meaning the WSOP, which begins at the end of May.

The release is devoted to the financial details and compensation awaiting any and all temporary dealers the WSOP can land, with starting pay of $12.50/hour and a $100 bonus just for completing one’s first shift. When it comes to calculating the pay per down worked, this year’s dealers will be “paid a guaranteed $15 per down for all tournament Hold’em only bracelet and side events along with a guaranteed $20 per down for all tournament non-Hold’em bracelet events.” Per down is the time spent at each table before being rotated to another.

The WSOP also states that dealers may also be eligible for a bonus paid from leftover funds at the end of the series, based on the number of downs worked.

It’s an understatement to say that the WSOP has launched a full-court press in its efforts to fully staff the series. The WSOP took out ads in Las Vegas’s local newspapers, the Review-Journal and the Sun, this past weekend, again extolling the opportunity. Though prospective dealers would have to meet some of the special conditions as noted, the WSOP has inferred that by dealing some of the tougher games, and with possible tokes also included, the dealers might make as much as $50 an hour.

That figure might be optimistic, but for the WSOP to willingly go public with such numbers as it seeks to fill many hundreds of temporary positions is itself unusual. And, the hiring push also includes an appearance from WSOP Vice President and lead tournament director Jack Effel on Caesars Entertainment’s corporate Twitter feed in a short video also promoting the opportunity.

“I’m here to tell you about the amazing dealing opportunity at this year’s World Series of Poker,” says Effel at the start of the two-minute video. After Effel details the rates and conditions, he extends a more direct invitation. “If you didn’t join us last year, or if you haven’t been with us in the last few years, and you’d like to make upwards of over $50 an hour dealing poker this summer between May 31st and July 20th, apply now and become a World Series of Poker.”

Lingering effects of pandemic shutdown root cause of shortage

As Poker.org has explored in various pieces over the last year, shortages of trained poker dealers have been a long-tail effect of the COVID-19 shutdown that severely impacted the casino and poker-room industries. Virtually all live poker venues were shuttered entirely for several months, and a significant percentage of the poker world’s trained-dealer labor force moved on to other forms of employment. Dealers typically must go through a training course lasting several weeks, in which they learn the rules of the various games, the work protocols that are likely to be place, and the mechanics of working in a typical poker room.

As a temporary, short-term employer, the World Series of Poker is more severely impacted than casinos or rooms that can provide year-round employment. For last fall’s 2021 WSOP, Caesars pulled out many of the stops, including exempting dealers from the vaccination requirement that players faced, and dealers who did choose to be vaccinated were paid a separate bonus. Caesars also cannibalized poker dealers from its other Vegas properties and in essence ordered them to work the series.

Even with those measures in place, and despite the fact that player attendance at the 2021 WSOP was off by roughly 25-30% (due largely to the vaccination mandates), the series still endured a few events where action was delayed due to a shortage of dealers. Those delays typically occurred on the weekends in the WSOP’s multi-flight, big-field events. Many non-bracelet events and cash games were canceled outright at various times.

Those shortages endured despite the long hiring efforts of Effel and his team. Effel himself was a finalist in the 2021 Global Poker Awards’ “Best Tournament Director” category. That award went to Matt Savage instead, but in his acceptance speech, Savage stated that Effel deserved the work for his yeoman’s work in trying to staff the 2021 WSOP.

Now, in 2022, another and likely even larger dealer staffing shortage looms. Virtually every applicant who meets the minimum training standards will be hired, but will it be enough? It’s of course too soon to know for sure, but there’s no doubt that the WSOP is doing everything it can think of to make the WSOP’s arrival on the Strip as delay-free as possible.