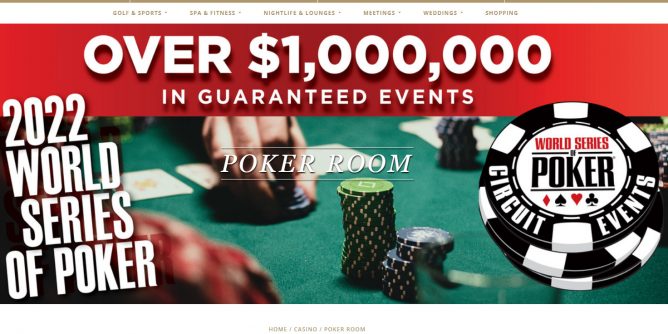 The World Series of Poker’s long-running Circuit series has finally made its way to New York State. Getting underway yesterday and running through March 29th, it’s the first time that the WSOP Circuit has offered a series at a New York venue, at Turning Stone Resort Casino in upstate Verona.

The WSOP’s Circuit series has run almost continuously since 2005, but none of those stops have taken place in New York until the visit to Turning Stone, not far from Syracuse. The issue has been a combination of an absence of Caesars Entertainment properties in the Empire State, along with a previous lack of willingness by one of New York’s existing tribal casinos to partner up with Caesars for such a Circuit dealer, until Turning Stone agreed to bring in the Circuit brand for 2022.

Turning Stone has hosted many independent series over the past two decades, though it actually pulled back from putting on major festivals for several years, beginning in 2014. It’s also a breakthrough of sorts for the WSOP. New York had been the second-most populous U.S. state to never have hosted a WSOP event of any sort. The most populous state to have never played host to the WSOP remains Texas, a situation that’s unlikely to change for at least a few more years.

Now, however, poker has returned to what remains New York’s largest casino-based poker room, along with that added WSOP brand presence. “For the next 12 days, Central New York will be the capital of poker in America,” promisedd Guy Renzi, vice president of gaming for Oneida Nation Enterprises, in a statement. “When people hear World Series of Poker, they know it’s going to be a massive tournament, huge guarantees, and exciting action, and when you couple that with Turning Stone’s impeccable reputation for guest service and providing exceptional guest experiences, you know this is going to be a March to remember.”

“Whether you’ve been playing poker for decades or just starting out, this is the perfect time to come out and get in on the World Series of Poker action,” added Frank Foti, who is Turning Stone’s director of poker, in a statement. “We’ve had a lot of professional poker players get their start here at Turning Stone and we’re looking forward to welcoming many of them back and seeing a lot of new faces.”

The series itself is already underway. Joseph Rice won the series’ first ring event yesterday, taking down the $400 NLHE opener for more than $27,000. Overall, this series will award 15 Circuit rings, including a main event starting next Friday that includes a $500,000 prize pool.