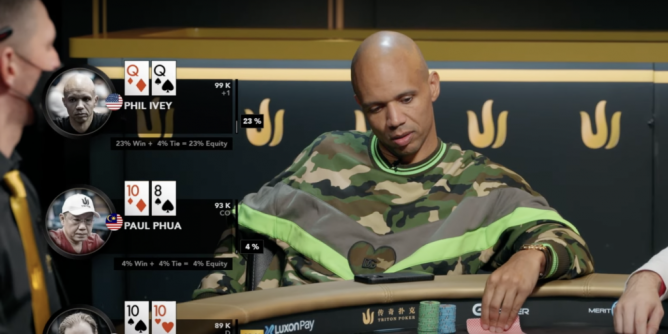 The Triton Poker festival in Cyprus last month saw some great tournament action. Now that the final table live streams are running dry, Triton Poker has started drip-feeding episodes of the $1,000/$2,000 short deck cash game they filmed on the island.

The game was hosted by the Merit Casino in the Turkish part of Cyprus. In the first episode, the table was made up of Phil Ivey, Daniel “Jungleman” Cates, Ferdinand Putra, Paul Phua, Michael Watson, Elton Tsang, and Danny Tang.

Fans of previous Triton streams will recognize a lot of the names, especially Paul Phua who can reliably be found wherever high-stakes short deck is spread.

Short deck is a variant of Texas hold’em in which the pips from 2 to 5 have been removed. Aces play as high or as fives and the hand rankings are adjusted to allow for changes to the hand frequencies. Instead of blinds, everyone posts an ante ($1,000 in this game) and the button posts an extra ante that functions more or less as a straddle.

The result is a game with much smaller pre-flop edges making for much looser play. In a game where everyone is sitting $100,000-$150,000 deep, that means some really big pots.

Ivey off early, Jungleman up a ton

After just half an hour of play, Ivey turned in for a good night’s sleep. No doubt there was a tournament the next day that he wanted to be nice and fresh for. His showing was enough to cut some promo materials from but not much else.

Ivey lost about $10k over the course of his stint at the table. This is about as close to break-even as you can expect in a game where Jungleman tripled up in 45 minutes.

Randy “nanonoko” Lew was in the commentary booth, giving viewers a rundown on short deck strategy as some of the best players in the world took on some wealthy amateurs for all the tea.

With sims on short-deck still in their infancy yet and the table heavy with dead money, the play had some of the spark of creativity that make lower-stakes streams and poker-boom-era High Stakes Poker such a pleasure to watch. Even if Jungleman did spend a lot of time holding his breath at the bottom of the tank (after the first hand, Tsang jokes that they need a tournament shot clock).