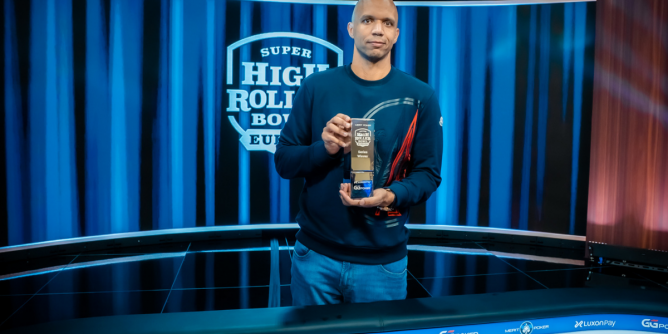 Phil Ivey came in first on the 2022 Super High Roller Series Europe leaderboard, winning himself the title of champion. Along the way, he picked up $2,880,100 in tournament cashes as well as two event titles.

The slightly awkward title comes from the dual hosts of the series. Triton held four events under the title Triton Poker Cyprus Special Edition. This series filled the hole in the calendar left by the canceled Triton High Roller Bali series.

The other host was Super High Roller Bowl which ran their SHRB Europe series alongside Triton’s. In total there were eleven events, four Triton events and seven SHRBE events.

A detailed breakdown of Ivey’s performance shows five cashes across the series, all at the final table of their respective events. He converted two of those cashes into wins and one into a second-place finish.

Ivey’s run also put him just under a hundred points behind Ali Imsirovic on the 2022 PokerGO Player of the Year leaderboard. Imsirovic has 1,839 points in the first place spot, Ivey now has 1,725 in second place.

Everything about the win was classic unflappable Ivey. The man just won a fancy paperweight to keep the week’s $2.8 million in cheques from blowing away and still his winner’s photo shows him posing awkwardly with the trophy in his hand and an uncomfortable smile on his lips.

His winner’s quote was a laconic “It is still nice. It is always nice to win a tournament.”

As usual, he seemed to calm almost to the point of boredom. Never mind, we’re excited enough on his behalf.