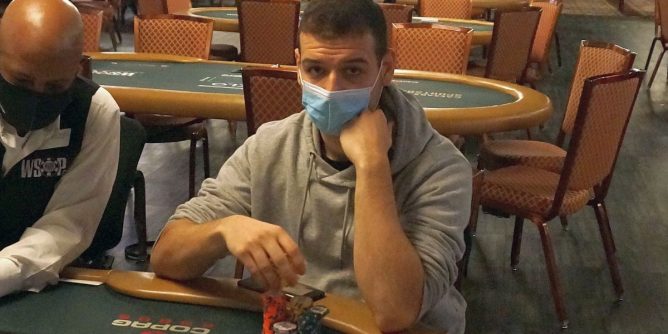 The GG Online Championship is GGPoker’s answer to PokerStars’ SCOOP. Despite the relative lack of brand recognition for the tourney, the series has managed to go hand-for-hand with SCOOP, becoming as much a part of the regular grind as GG’s more established market nemesises.

Schwecht has a good track record online, having come second in the 2020 WSOP Online $525 Bounty event. He also has around $200k in live cashes listed on his Hendon Mob. This event is comfortably his biggest tournament prize to date.

Along the road to victory in the two-day event, Schwecht saw the field fall from 6k to 916 on Day 1. Players who returned on Day 2 still had to play down to 700 players before the money broke. After that, there was a min-cash of $3,474.

Schwecht’s toughest opponent going into the final table was Michael Addamo who came in strong, but ultimately taking a tumble and dropping out of contention in 8th place.

After that, the table was a much easier prospect and Schwecht sailed to victory.

While Schwecht was mopping up his table, the $25k high roller was also resolving itself across the servers with 77 entries and a first-place prize of $423,845.

These astronomical numbers are in the region you might expect for a series that has combined guarantees of $150 million.

Offering a $150 million guarantee for the GG Online Championship series strongly suggests that GGPoker is pretty unconcerned that allegations of cheating on its platform and the company’s problematic sponsored pros might impact its bottom line. And they were right all publicity, it seems, is good publicity. In the end, players still turned out in droves.

With the WSOP about to become a huge GGPoker marketing opportunity, they are probably right to continue to be so bullish.