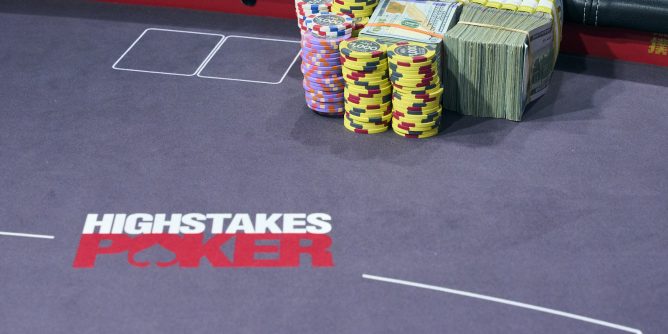 High Stakes Poker‘s ninth season has come to an end and what a season it was. The last episode of the 14 episode run released on PokerGO on Tuesday. This episode wrapped things up just ahead of the 2022 WSOP.

Season 9 is the second outing for the new version of the show. The first incarnation of the show, filmed and distributed by the Gameshow Network, gasped its last in 2011. That was the year of Black Friday and a turning point for much more than just poker TV.

Mori Eskandani, the president of PokerGO, was also one of the original producers of High Stakes Poker. So when PokerGO announced it would bring the show back, it thrilled the poker world.

Season 8 was a blast from the past. AJ Benza and Gabe Kaplan were back in the booth. All the greats were back on the felt (along with some new faces). Plus we got to watch without even worrying about missing stuff during the ad breaks. If it weren’t for the Aria chips, the shorter sessions, and a lack of cash bricks, it could have been 2011 all over again.

At least the cash bricks were back for Season 9.

PokerGO teased season 9 with an interview from Phil Ivey. In it he discussed “the show, his motivation to play, and how he views his appearances on High Stakes Poker now compared to when he was first on.”

Get yourself ready for tonight’s High Stakes Poker Season 9 premiere with this interview with @philivey. He talks about the show, his motivation to play, and how he views his appearances on High Stakes Poker now compared to when he was first on.https://t.co/WoSu3Ayg2D

Return of the pros

In the concluding episode we saw DoorDash Co-Founder Stanley Tang tangle with Tom Dwan. We saw Doyle Brunson show that retired or not, he can still sling cards with the best of them. And we saw that the HSP deck is just never going to cut Daniel Negreanu some slack. Dwan cold-cocked Negreanu with an even colder deck several times.

The episode rounded out a season of great poker. The first episode of the season began with the stakes at $200/$400. In the second half of the season the blinds jumped to $500/$1,000 for some real nosebleed inducing action.

The full roster for the season was a cash game dream team. There were old school pros like Brunson, Negreanu, Dwan, Patrik Antonius, Phil Ivey, Jennifer Tilly, and Garrett Adelstein. Xuan Liu joined one of the legs to represent the younger generation of pros. And amateurs like Kim Hultman, Krish Menon, James Bord, and the talkative Eric Persson were there to keep the game light.

Bryn Kenney brought some controversy (more on that in a sec) and Jean Robert Bellande turned up to to keep things interesting. His tales were even highlighted in the PokerGO promo tweets “Come for the @BrokeLivingJRB stories, stay for the insanely big pots!”

The season also saw two of the biggest marketing coups with perfectly timed off screen drama. One drama might have been calculated, the other almost certainly was not.

Eric Persson’s debut on the show happened to co-incide with his high profile fracas with Phil Hellmuth in round one of PokerGO’s heads up bracket. Many suspected that his beligerence and Hellmuth’s subsequent tantrum were co-ordinated for headlines.

However, you can blame marketing for co-ordinating Bryn Kenney’s scandal. His episodes in Season 9 were airing at the same time that the bizarre accusations against Kenney appeared. The allegations (which Kenney firmly denies) included cheating at poker and running a something approaching a cult (complete with shaman and ritualistic frog poisonings). Not bad timing for a show that wrapped up its filming back in December of 2021.

The PokerGO schedule will be dominated by the WSOP for the next couple of months. Here’s hoping Season 10 of HSP will follow on soon after.