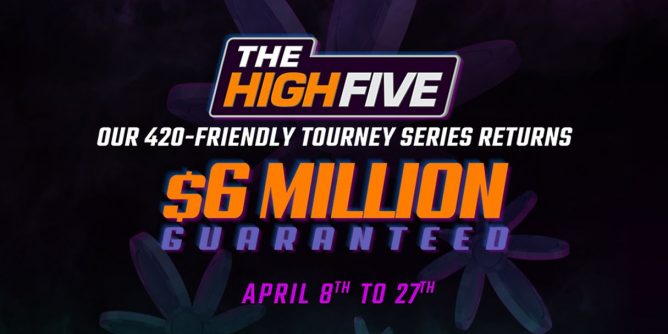 If you love pot-related quips as much as your pot, Americas Cardroom has you covered in April. “Take your bankroll higher than you’ve ever imagined!” screams just one of many, many 4/20-themed takes from ACR as it announces the return of its “High Five” tournament series, running “4 20 days” in mid-April. The High Five series returns from April 8 through April 27, 2022, including $6 million in guaranteed prize money for the taking.

There’s naturally going to be plenty of cannabis-themed fun as the series rolls on. “It’s time to smoke your opponents again,” quips ACR, in promoting the series. “[Y]ou’ll love the fresh crop of 100 tournaments we’re rolling out, (and) there are some big highlights you simply can’t afford to miss.”

Whenever and wherever “420” could be worked into the series’ and events’ structure, you can be sure it’s been introduced. The High Five’s two separate main events showcase this. A multi-flight $420,000 Guaranteed Main Event with a $55 buy-in runs through much of the series, offering a full week’s worth of opening flights, and there’s also a higher-priced $1 Million Guaranteed Main Event on the final weekend, featuring — you guessed it — a $420 buy-in.

Day 1 flights for the week-long $420 Guaranteed main begin on Sunday July 10 and run through Sunday, July 17. Though not specified as yet, that final Sunday’s Day 1 flight will likely be an early-day turbo, as the event’s official Day 2 takes place later that same day. In the $1 million guaranteed main the following weekend, there are two Day 1 flights, on Saturday, April 23 and Sunday, April 24. Surviving players in that event can “light it up” for Day 2 action on Monday, April 25.

The “420” theme is hardly limited to the monetary elements. Every day throughout the series, there will be a special 10-minute courtesy break each day at 4:20 pm Eastern Time. As ACR explains, it’s “so you can take a breather.”

Overall, the High Five series will roll out its “High Five” separate events on each of the 20 days in the series, for a 100-event slate in total. ACR has yet to release the entire schedule for the series, but it will become available in a few days at the landing page for the series.

“Prepare to blaze the tables,” ACR teases. “Take your bankroll even higher.” Even the pros might be recreational players for this one.