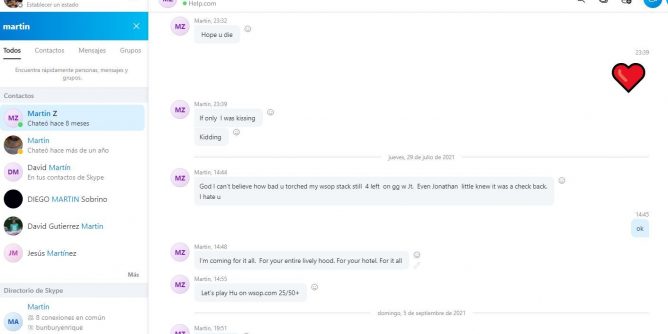 Poker.org has received an exclusive statement from Sergi Reixach, one of several players accused recently by Martin Zamani on Twitter and on a popular poker podcast of participating in a multi-faceted cheating scheme on GGPoker prominently including the use of RTAs (real-time assistance).

Reixach’s statement as provided to Poker.org has been edited for clarity and readability in just a few spots, and it contains no changes of significance from the original text. It is presented in its entirety as provided to us by Reixach earlier today. Poker.org offers no comment nor accepts responsibility regarding the veracity of Reixach’s claims, but recognizes Reixach’s right to make a public statement regarding the allegations and thanks him for doing so. Reixach’s complete statement follows:

After watching the series of tweets and the interview given by Martin Zamani yesterday, I feel forced to write and comment fully in order to deny certain accusations he threw at me and provide more content for some of his other accusations.

First of all, I think it’s important to show the current state of the relationship between Martin and me, so attached is a screenshot of some of my texts with him that show the anger and violent threats he made to me. I feel he blames me for everything wrong in his life, and his level of hate toward me has reached a point where I have been receiving death threats from him for the last few months.

As you can see, it’s true that I helped him at that WSOP (Online) final table. As he said in the interview, I was having dinner with my wife and received a text message asking me if I could go there and help. Around that time I was already coaching him in Mexico. So I went to his place to help him with the final table and use the opportunity to give him some advice about how to play final tables. Things didn’t go well, and we busted in the third or fourth hand. You can imagine by the Skype conversation [image below] that that was the first and last time I helped him live in a tournament.

The accusations of a ghosting scheme are completely false.

I did coach several horses of Bryn [Kenney], same as @girafganger7 [Bret Stevens].

During the interview, he also accused me of [assisting] his play with the “RTA system device,” as if I had some kind of dream machine for MTTs. That’s not true. I asked GGPoker several times for my hand histories to prove that my game is far from GTO (game-theory optimal) but they didn’t let me have my hands. This will connect to the second accusation he threw at me.

It is true that I’m banned from GG since 2020. According to GG, that was due to the use of illegal preflop charts. I’m not going to say I never used preflop charts, or that the charts I used are or should be legal. I just want to remark on something we all know. Almost 100% of professional poker players at some point used some kind of preflop charts, and the line where those preflop charts became illegal/unethical is not that clear and also moves from one year to another or from one site to another.

As an example, a few years ago, the support team of one of the biggest sites confirmed that having thousands of static preflop charts was allowed for use in-game. Also, I would like to remark that at the high-stakes level, the use of preflop charts is almost irrelevant and only serves as an initial guide, as in every spot you must deviate from chip-EV solutions due to ICM and future game considerations, which I massively do all the time.

Finally, there was the accusation of all the Spaniards colluding and soft-playing in the $5K – $25Ks. That accusation is completely false, and there’s not a single proof or clue that could make anyone think that happened. It shouldn’t be on me, the responsibility of defending against it, but I will [do so] anyway.

First of all, all the other Spaniards are not banned and still play on GG, even when I’m sure that I/we were heavily investigated by [GG’s] support team. Second, I don’t expect people to “trust my word,” but I want to share some of my background. For seven years I lived with “pablotenisis”, another high-stakes Spanish pro. In all those seven years he is the only one I ever swapped action with in tournaments. The only time we were ever in a “tricky spot” was in a SCOOP 4-Max final table. As soon as we both got to the final table we warned the rest of the players that we were living together and it would be best to [make a] deal.

PokerStars ran an investigation on its own which was cleared without any problems or doubts. We knew of the investigation only after support sent, by mistake, a complete player profile to Pablo which showed Stars’ private information. “1_conor_1” was at that final table and can verify we offered the deal.

I and the Spanish poker community have also been investigated several times by PokerStars [regarding our play] in the SNG 6-Max turbos and hypers, and we were never banned.

I did not bumhunt in any aggressive way. In fact, I was starting almost all all the games, probably losing a lot of chip-EV, sometimes against better players, as deep play is not my specialty.

In hindsight, I know I made some mistakes and should act differently. But it is more than clear that Martin is throwing false accusations at me.