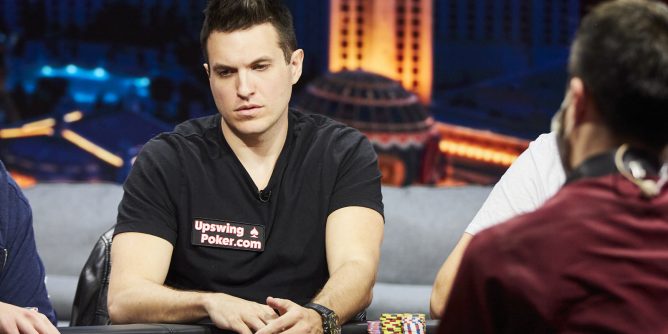 You will sometimes hear poker players talking about “levels” of thinking. It’s a way of quantifying how a poker player is thinking about their hand and their opponents’ hands.

“Level One” means that the player is simply looking at their cards, and ranking their hand on the poker hand scale. It’s how a video poker player sees the world. “I have a straight – that’s really good. I have a flush – that’s better.”

“Level Two” means that the player is thinking about what their opponent might have. “I have two pair, which is pretty good. But the way that person is betting suggests they might have three of a kind. So I have to be careful.”

“Level Three” is the next step up, in which our hero thinks about what their hand must look like to their opponent. “I raised preflop, and then bet two streets on an ace-high board. This must look like a pair of aces at least.”

“Level Four” raises the mental stakes further. At this point, it’s best stated as, “What do they think I think they have?”

Nothing, except wisdom, prevents this cognitive arms race from continuing indefinitely. The truth is that few players get anywhere near this state of analysis. And you hear poker players talking about “leveling themselves” into bad decisions. That is, if you play as if the opponent is thinking higher up the scale than they actually are, you can play right into their hands.

But when two experts tangle, it’s hard to know where the leveling battle ends.

Consider this hand that appeared on YouTube recently. Doug Polk, a legendary player and theoretician, got into a hand against another extremely good player who goes by “E” on the video graphics. E opens to $150 from middle position with 88, gets two callers, and then Doug calls with 44 on the button.

The flop is A-7-4 rainbow, giving Doug bottom set. This is a good flop for E’s range, though not his actual hand. That is, he will have a lot of aces in his opening range, and if nobody else has an ace, he may well take the pot down right there. So he bets $200. The other two players fold, but Doug obviously is going nowhere. Doug raises to $675, exactly because E should have a lot of aces, and he’s never going to fold an ace to one raise. In Doug’s perfect world, E has something like AK, which looks powerful, but is actually drawing near-dead.

For reasons I don’t fully understand, E calls the raise. But he’s instantly rewarded with an eight on the turn, giving him a larger set. Knowing that Doug has a strong hand (why else did he raise on the flop?), he checks. Doug bets $1500 into a $2000 pot, and E springs the trap, raising to $4100.

A Level One player in Doug’s shoes would think, “I have a set!” and promptly shove all their chips into the middle. Doug is already at Level Three. At least. He knows that he has shown strength by raising the flop, and then betting the turn. And yet – and yet E wants to put a bunch of extra money into the pot.

The commentator here, Mike Brady, correctly points out that Doug needs to be worried. He has the smallest possible set. It’s possible that E flopped a set of 7’s. In fact, there’s no reason E can’t have a set of aces (he was the only raiser preflop). Brady also notes that E could have 65 (presumably suited), which flopped an open-end straight draw, bet, got raised, called, and then promptly turned the nuts.

Polk decides to see a river card and use his position to get more information from E. With $10,100 in the pot, the river is an inconsequential 2h, and E shoves his remaining $10,300 in, giving Doug almost exactly 2:1 pot odds to call.

Doug could level himself up to thinking that E is playing 4-D chess with him. They both know that huge strength has been shown on both sides, and E could be running an audacious bluff solely on that merit – he knows that Doug knows that he is representing the nuts or close to it.

But Doug… well, I will let you watch the video and see what Doug Polk does. Here’s my suggestion: don’t focus on the outcome. In fact, the outcome was decided by a “coin flip.” Focus instead on Doug’s thought process, and how he makes his decision.

Neither you nor I will ever be as good at this game as Doug Polk is, but we can learn from his techniques, including when to climb the level ladder, and when to stop.