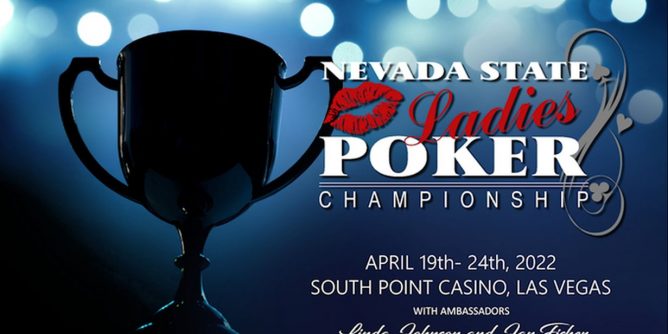 The six-day series includes multiple events and happenings each day, from yesterday’s opening Omaha-8 Championship, won by Espy Enriquez, to this weekend’s $550 NVSLPC championship, which also carries a $50,000 prize-pool guarantee. (The complete series schedule can be found below.)

In a final table ICM Chop in the Omaha 8 event of the NV State Ladies Poker Championship series, congratulations to Espy Enriquez for the Trophy and all of our cashers! @SPPokr pic.twitter.com/GQnV4nsrTD

The series is coordinated by the Ladies International Poker Series (LIPS), which was founded in 2004 and remains the largest tour offering ladies poker events and co-sponsored by the Women’s Poker Association (WPA). This year’s series is hosted by Women in Poker Hall of Fame members Linda Johnson and Jan Fisher, who also served as bounty targets during an opening-night event.

Single-table satellites are available throughout the week for players seeking to win a seat into the main event, which begins on Saturday and concludes with final-table action on Sunday. Last year’s winner was La Mesa, California’s Mikella Pedretti, who won $11,999 after a three-way chop with two Las Vegas players, Samantha Holmes and Kristen Deardorff. The 2021 NVSLPC main event attracted a record 317 entries. This year’s main event has seen its price point bumped up significantly, from $275 to $550, which may hold down overall entries, but will likely generate a new record prize pool.

Today’s events also include a special WPA-affiliated “Purple Tie Guy” event open to men as well as women. More details on the series are available on the LIPS Tour page dedicated to the series.